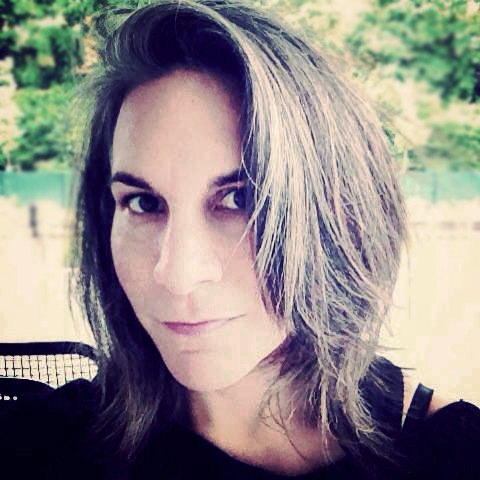 Confession: I started dying my hair when I was 18. I won’t say it was specifically because I had noticed some gray hairs, but I can’t say it wasn’t either. I still fondly dream about the ‘cherry coke’ colored years in college.

Flash forward, to 18 years later!!! I had gone to get a haircut with my stylist in the East Village, and had neglected my roots. I was probably going to pick up some ‘Nice ‘n Easy’ on the way home. But, when my stylist investigated what was going on under the varying color layers as she moved through with my cut… she proposed an idea. Why not go gray? Let it grow out. ‘Let’s transition’ she called it with a spark of joy in her eyes.

I suddenly had visions of months as a skunk. Um, no thanks.

She went and grabbed some pics of….. Diane Keaton and Mrs. Robinson. Hello, I’m 36… not 66. But, her enthusiasm was magnetic, and I decided why not. I could always cover it up if it looked wonky. And, really, I had no idea what it looked like under there, I was curious.

She assured me that we’d create a plan, a system… NO SKUNKS!

So, over the next few years we worked our plan. It was around year 2 when she finally declared, “Your hair is officially metallic!” triumphantly.

We’d seen some streaks of varying color, there was even a season where I was blonde. As one friend described, I looked like a Mandrell Sister (in the most loving way, of course).

But, something else in me was awakening. I have always been a bit of a quiet, or not so quiet instigator, someone who pushed the envelope, wasn’t afraid to provoke a bit of controversy… and it seemed I was now doing it with my hair.

I would get looks on the subway of horror from the completely done up ladies, with eyes screaming: how could you let yourself go like this! Or looks of solidarity or even a touch of pride from my subway sisters who were also skirting the edges of decency. I had no idea what a political statement letting my hair grow out gray would be! I had no idea that it would feel so punk and progressive, transversive, or loud. Or that it would force people to take sides.

I also didn’t know how emotionally difficult it would be for me to step forward in this way. Suddenly, in New York City, where everything is allowed… my streaks of gray in my hair were more outrageous than the man wearing a suit made completely of tin cans.

It made me feel self-conscious sometimes, but it felt like an interesting project that I wanted to see through.

I noticed once I’d passed the hurdle of my own initial shock, settling in to who I am, it allowed for some interesting conversations. People want to talk about it.

Generally, now, I forget about it. It’s been an exposed part of me for nearly 4 years. Yet, even now, living in Europe, where beauty standards are a bit different than the US, people want to talk about my hair. Plus, I get tons of compliments (mainly from men).

People use it as a conversation starter. They assume things about me before meeting me about my level of courage and confidence.

And, they’re often confused, since I look young, and even often comment that they think I’m at least 10 years younger than I am… which I can only believe means, that people believe only someone in their 20s would do something so wild with their hair as a statement. Not a (nearly) 40 year old lady, who just happens to love having white hairs. It’s strange that people care so much.

They say Blondes have more fun, and if that’s true… I’d like to offer Grays have more liberty. People expect you to have more of a ‘fuck-it’ attitude, and allow you that.

Cheers to the Gray Ladies, claim your freedom.